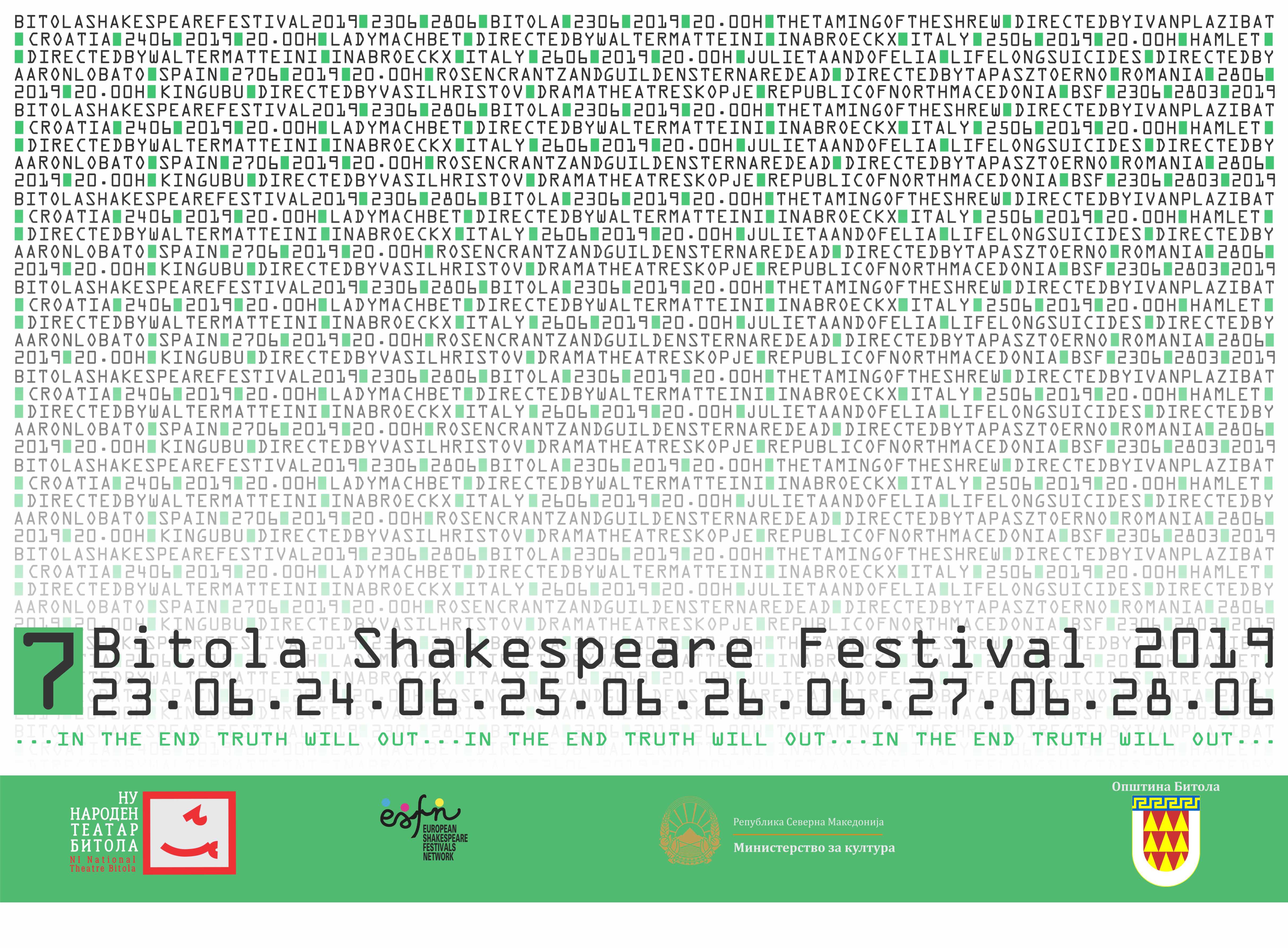 Imagine the world and humanity came to an end, all our civilization, as we know it today, it’s supposed that it could be rebuilt and reconstructed solely based on the works of William Shakespeare.

No one has ever managed to outshine his genius, talent and vision.

This year, on the Bitola Shakespeare Festival we’ve “dealt with” a particularly interesting programme. The six plays on the main programme of the festival offer a fusion of disciplines and theatrical expressions, such as modern dramaturgy, dance, performances and powerful aesthetic stage visualization.

Inspired by the genius, the authors offer us another Shakespeare, one that is chewed, recycled, one that is commented on, rewritten, copied…

Come to see theatre, to asses, to talk, to argue, to be amazed…In the end, truth will out… As long as our eyes glow…

THE TAMING OF THE SHREW 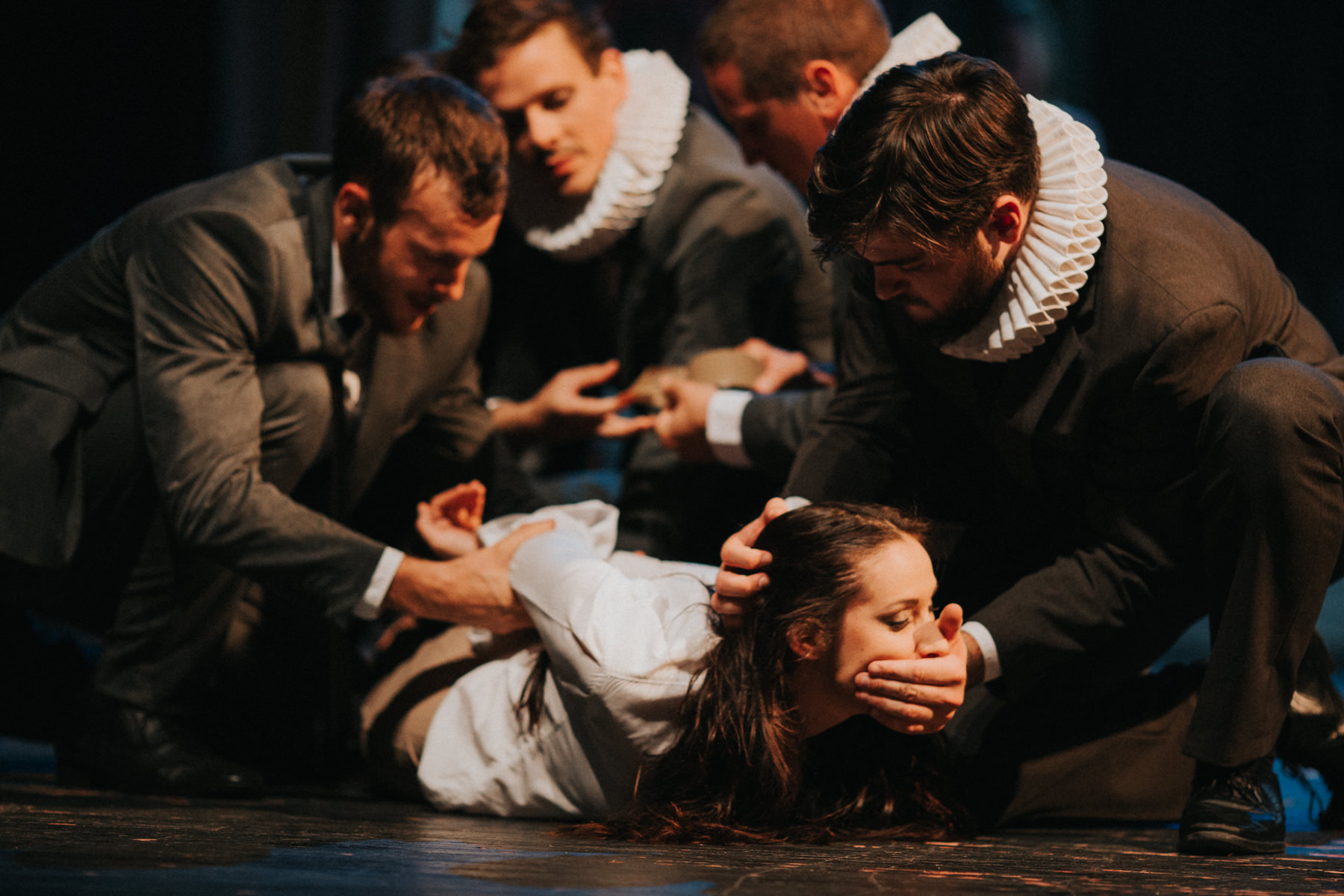 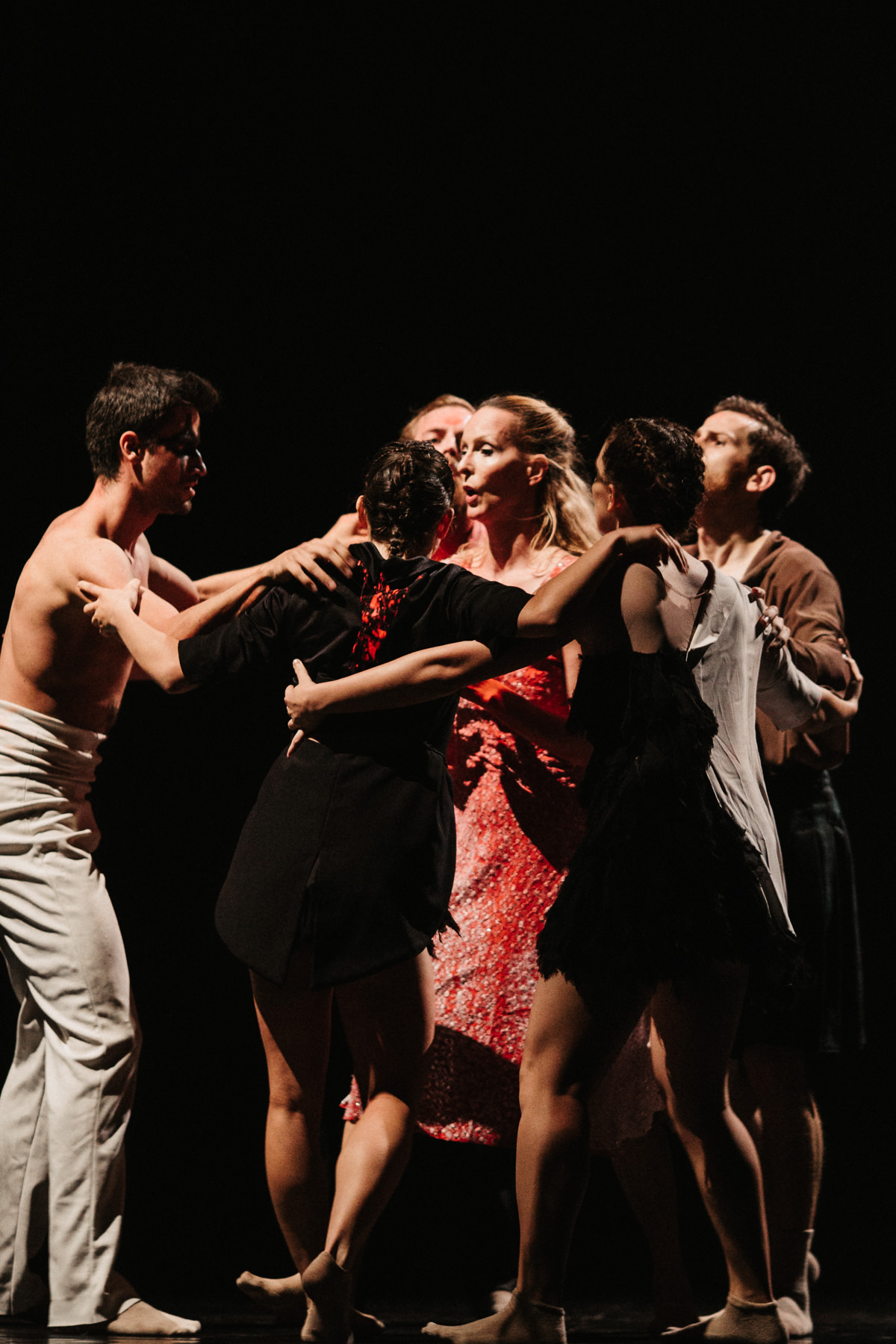 Lady Macbeth is inspired by Shakespeare’s timeless tragedy. The performance focuses on the devastating and bleak love story between Macbeth and his wife. Their passion, ambition and relentless pursuit of power causes them to fall victim to their own intrigues. Shakespeare has infused this drama with timeless and universal sentiments, which is why our story is set in an unspecified period of time and place. It starts off where Shakespeare’s version ends: the Macbeths are dead. Freed from their earthly torments, they are however condemned to endlessly relive the darkest period of their past – a punishment inflicted upon them and which they in turn inflict on each other. They blame one another, seeing the other as the real culprit. Thoughts take shape, the characters come to life and relive the dramatic events of which they were once the protagonists. But like memories, these events change over time. What is more: their nightmare is interspersed with moments of love and tenderness. Lady Macbeth is a drama about life and death, and about the ambiguous relationships between people, taking the audience on a journey to discover the complexities of the human psyche. 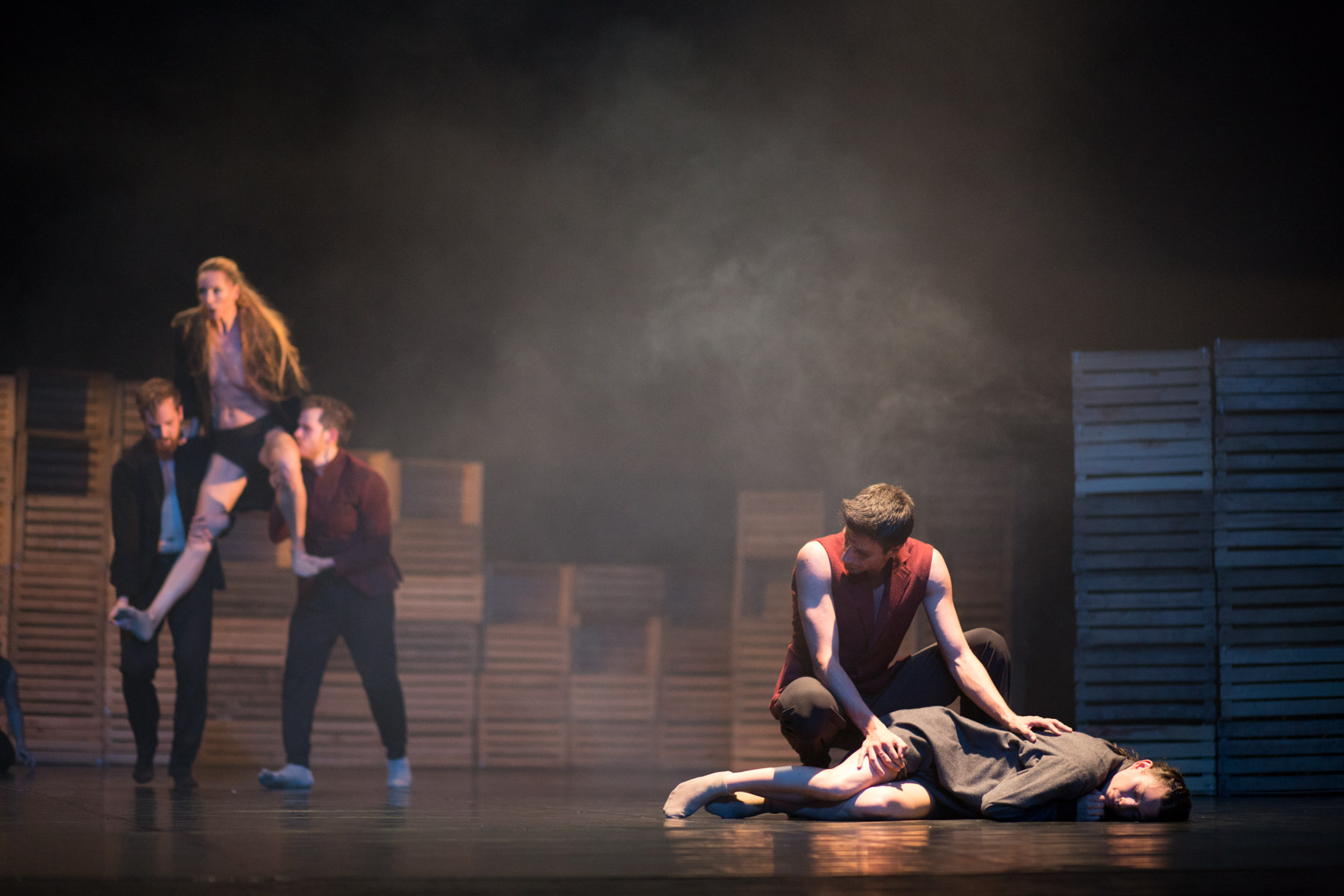 Our heroine, a mentally unstable young woman, identifies herself with her namesake, Shakespeare’s Ophelia. Reading is her only lifeline – when she reads she finds peace and serenity. Reading Hamlet, she tries to understand what happened to her. Words take shape, characters come alive and through the story told by Shakespeare, Ophelia relives the dramatic events of her own life. Hamlet is a drama about life and death, and about the ambiguous relationships between people, offering the audience a journey through the darkest alleys of the human soul. 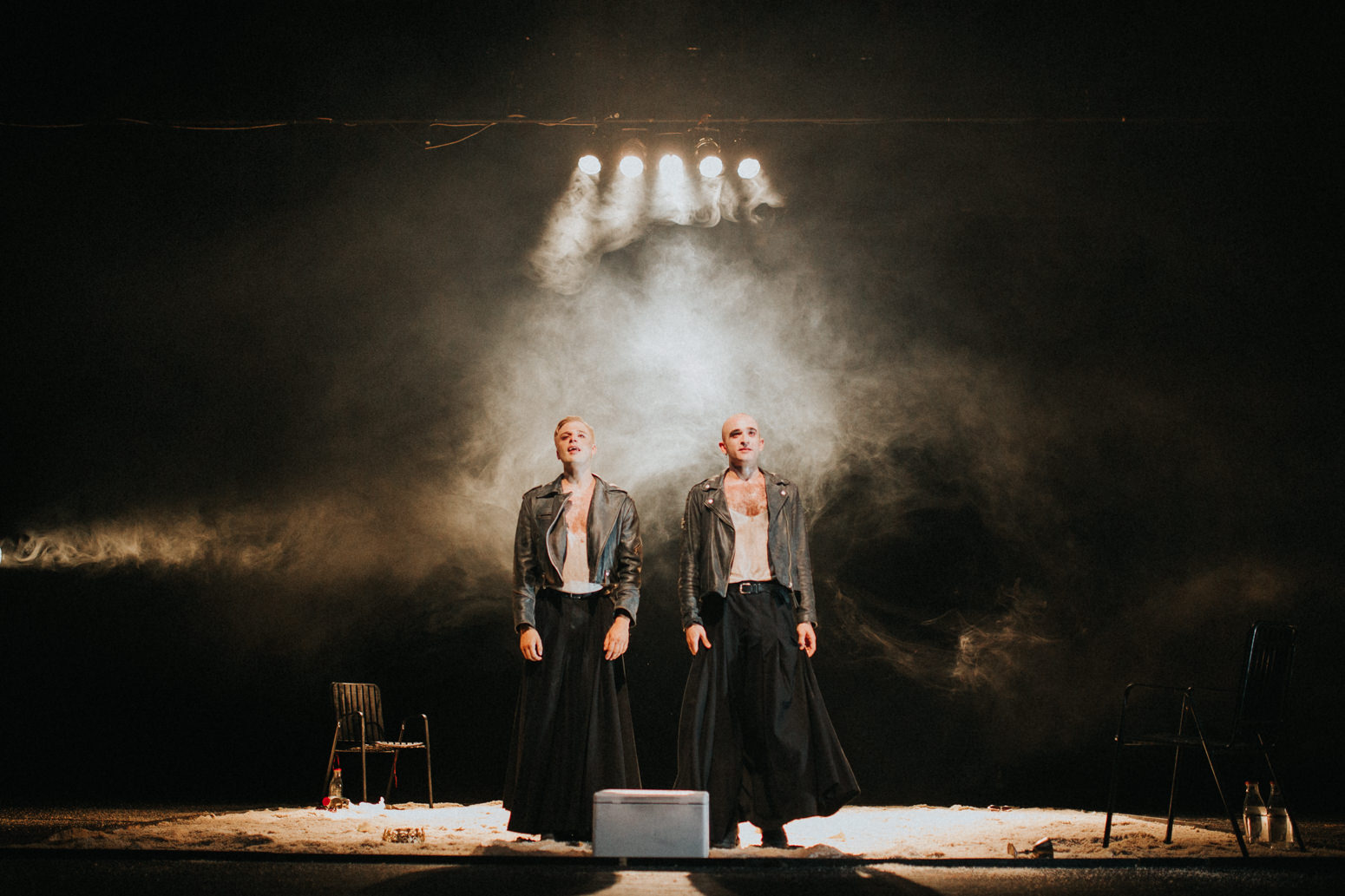 The masculine and the feminine. Good and Evil. Up and down. Life, death Theater or television? The spiritual and the flesh. Eros, Thanatos. It seems that the perception of the universe -at least in Western society- can not detach itself from dualism, from the choice or obligation to choose one or the other. ‘Nulla ethica sine aesthetica’. This Juliet and this Ophelia that we present, may be neither man nor woman, neither victims nor heroines, and their time and space is no longer determined by the line (like ours), and by the antagonistic, the dual. Is every entity, idea or situation binary in itself? And what happens or how is it named what is detached and is no longer identified in that classification?

Ophelia and Juliet have committed suicide on stage more than a million times. Our heroines awake in a limbo, where they share the details of their dishonor. Time and space have been suspended: they return to talk with their loved ones and their unloved ones, comment on the news as two seasoned celebrities, immerse themselves in traumas and unrealized memories, and question their status as women, victims or survivors of their own history. As women who have survived more than four hundred years of suicide, as suicides who love life too much, as suicidal suicide victims, they never die.

“ROSENCRANTZ AND GUILDENSTERN ARE DEAD” by Tom Stoppard

The French author Alfred Jarry was the forerunner of the Surrealism in the theatre as well as the precursor of the Theatre of Absurd. His best known play King Ubu is considered to be the first modern play in the theatrical avant-garde tradition that immediately drew the attention of the audience towards the artificiality of theatrical conventions.

This text is among the first three stylized burlesques where Jarry mocks and addresses the anomalies of the modern society. The protagonist Papa Ubu through the structure of grotesque parody of Shakespeare’s Macbeth, shows the coward King Ubu, the symbol of the bourgeois class, as someone who is ruthless and unscrupulous led by the motto “the end justifies the means”. This central character, known for his absurdly infantile perspective on the world and insatiable greed is presented by the author as a representative of the modern man. Thus, King Ubu is a metaphor of the modern man, who is ugly, vulgar, greedy, grandiose, insincere, dimwitted, immature, evil and coward. At the same time, the author emphasizes and differentiates the greed and the lust for power – the syndrome of the modern world.

Today, 122 years after the first performance of King Ubu, we still linger on it and stage it due to its originality and provocation. Jarry’s vulgar grotesque is interpreted as director-actor’s distance and comment on the non-values of the modern man. King Ubu is a source of countless theoretical and practical researches that inspires entire ideas in creating the theatrical aesthetics of the 20th century.